They say that success is 50% luck. So, by all accounts, I was lucky the day I bumped into the owners, Andre and Kiersten, of this Cottesloe home in a local coffee shop who, a few months later, became clients and one of Barefoot’s first projects.

This project is the apogee of residential renovating: older character home, ugly 70’s addition, builder/designer on-board from the outset, renovate, extend and landscape plus super easy clients to work with – brilliant!

But what makes it even more appealing was the vision of the client to not simply bulldoze the existing house and drop a ‘rendered box’ in its place; an exercise which would have been quicker and cheaper. I make little (nah… “no”) apologies for the creative dessert that surrounds so many of the pop-up homes increasingly finding their way into the changing landscape of our inner suburbs.

“This project is the apogee of residential renovating”.

However, I do accept these homes provide incredibly good value for money and with the cost of living far exceeds the income brackets of most of us mere mortals, they provide a tremendous solution and economies that reflect very tightly run business models. And, for that I applaud them.

With a growing family and love of the area, the brief was simple – create a casual and relaxing two-storey addition that complemented the original home with a Hamptons vibe. Without providing any gratuitous ‘plugs’ Subiaco Restoration provided many of the materials and cladding that made the finish so timeless; it’s about getting it right and not accepting compromises. 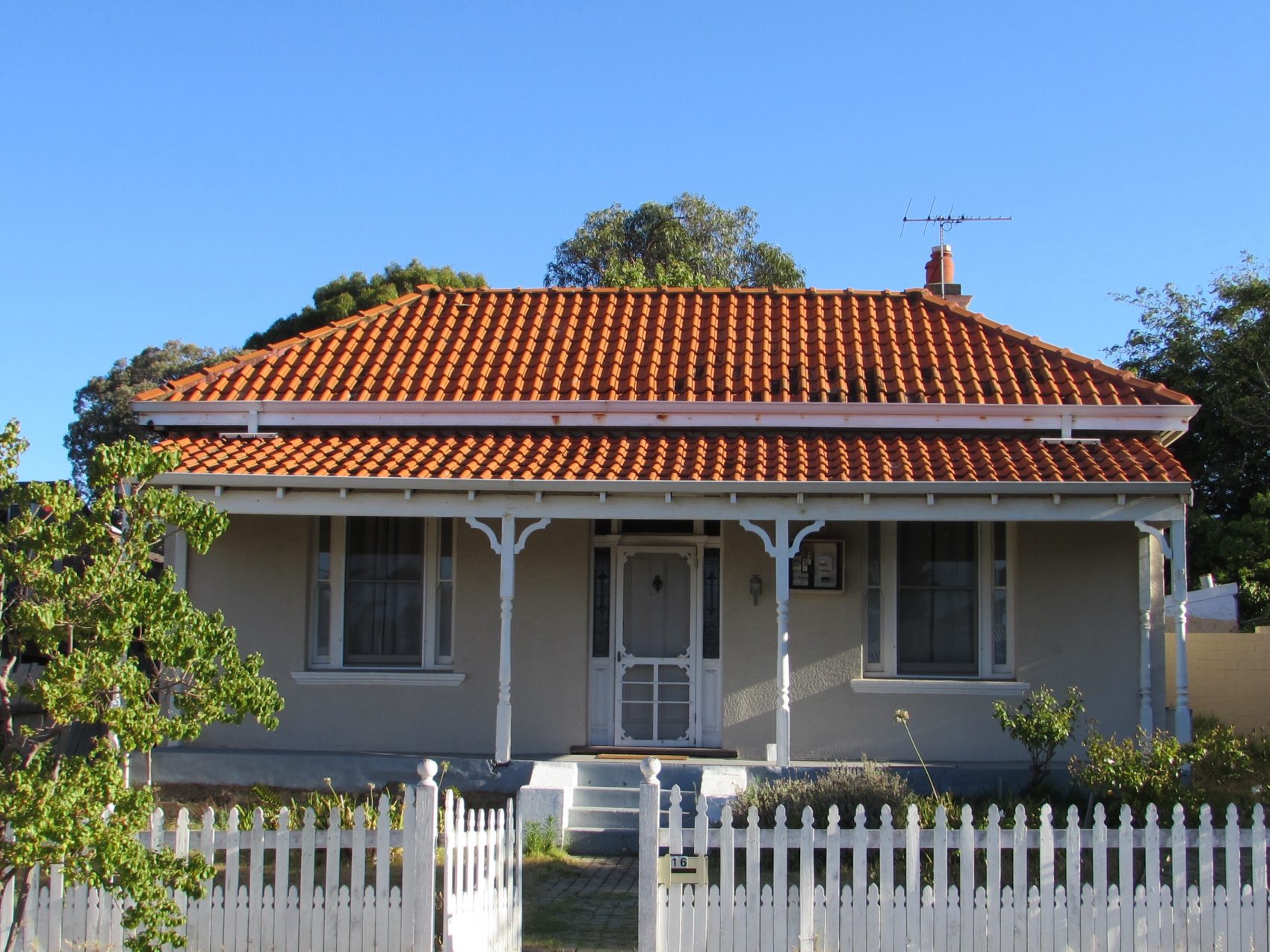 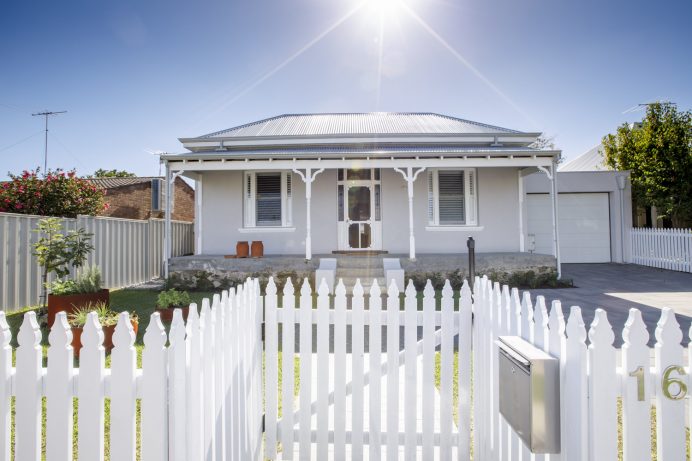 As with most renovations, there were a few unknown headaches that entered the equation but by any account, they were relatively small, inexpensive and easily manoeuvred around. Maybe the biggest but also a common one was the house wasn’t square on the block (yep, sometimes hard to believe!).

As with most things in construction, while there’s often a solution, it’s the ‘knock-on’ effect further into the build that needs to be considered.

For this problem, there were two issues; A) The alignment had an impact on the second storey as this too wouldn’t line-up, and B) The timber flooring on the ground level, was to run through from the front of the original house to the end of the living room in the new addition. Visually this would now have a ‘kink’ in it – not cool!

Needless to say, a solution was found and the end result was seamless.

While changes often occur during a project, the biggest impact with changes outside of any cost consideration is the program. Time spent upfront going through the detail is time saved on site. There are always some decisions to be made along the way and that’s just part of the journey.

“It’s like driving to Gnaraloo; you know you won’t make it on one tank, but you might not be sure which service station you’ll stop at along the way”.

If the budget was unlimited, there’s always somewhere to keep spending it! But I think this is a good example of spending in certain areas and minimising in others. The budget was realistic but, in all fairness, I don’t think greater spending would have gained much more in the finished product (with the exception of a ‘zip-line’ from the rear balcony of the house – this was a clear demonstration of builder + wife pitted against husband and, justifiably so, winning the decision to leave this out of the budget (he was fair dinkum!)).

In a display of yin-yang Andre did succeed in his second attempt at integrating non-structural steel design features into the home; a sleek pull-up bar fully welded to the first-floor structure and carefully finished through the gyprock ceiling including a 10mm negative-detail in the….no not garage…casual room!

“I’m rather partial to the odd character building marrying a contemporary extension and living happily ever after.”

As the project moved from the ground floor to the upper floor it became clear that the view out to the garden was dominated by the rolling grass embankment and would lend itself to a drop in the levels of 600mm, which is fairly substantial. This was ultimately a great change in the process and one that couldn’t have been foreseen until this stage of the project was reached.

In many scenarios reducing levels to this extent is little more than a big digger and bigger truck to take the soil away. For Kiersten and Andre they had the issue of the rear laneway, which was going to be undermined. Not to be put off by small details, it was a case of ‘injecting’ micro-fine cement under the laneway at the boundary for temporary support, followed by excavation and a triple-leaf, concrete-filled retaining wall and backfill to satisfy the council and engineer. 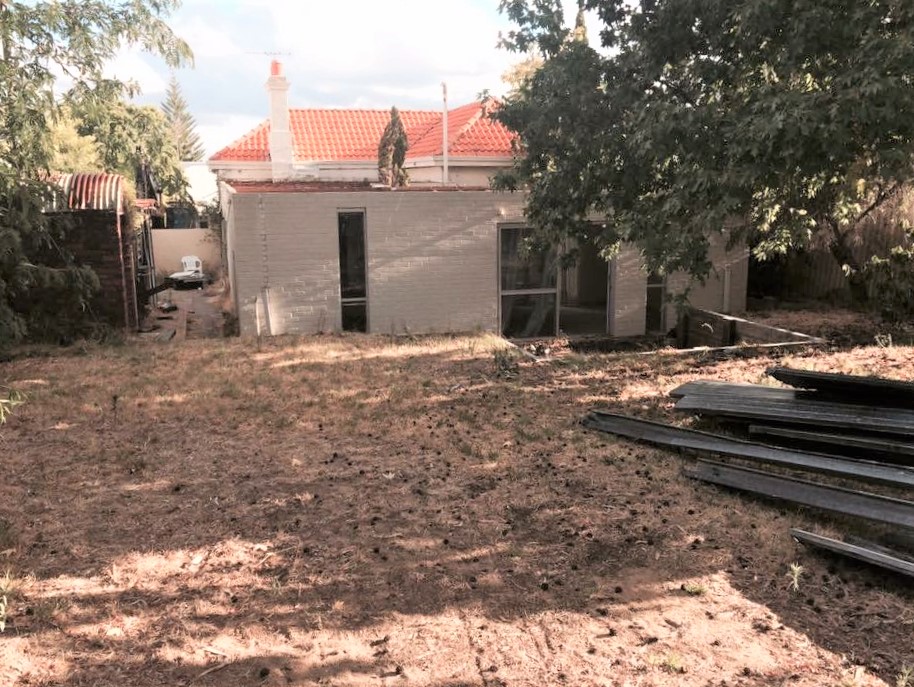 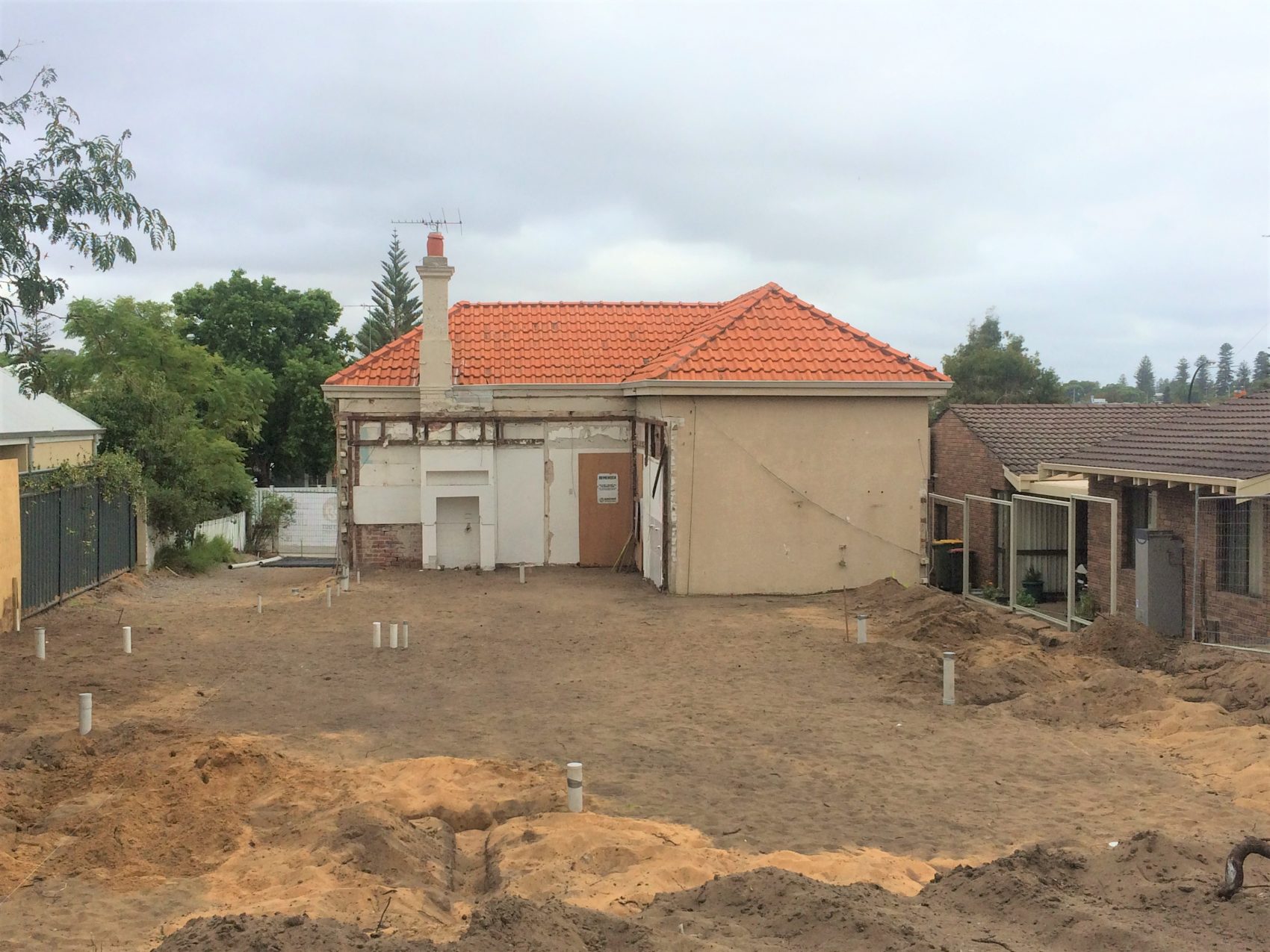 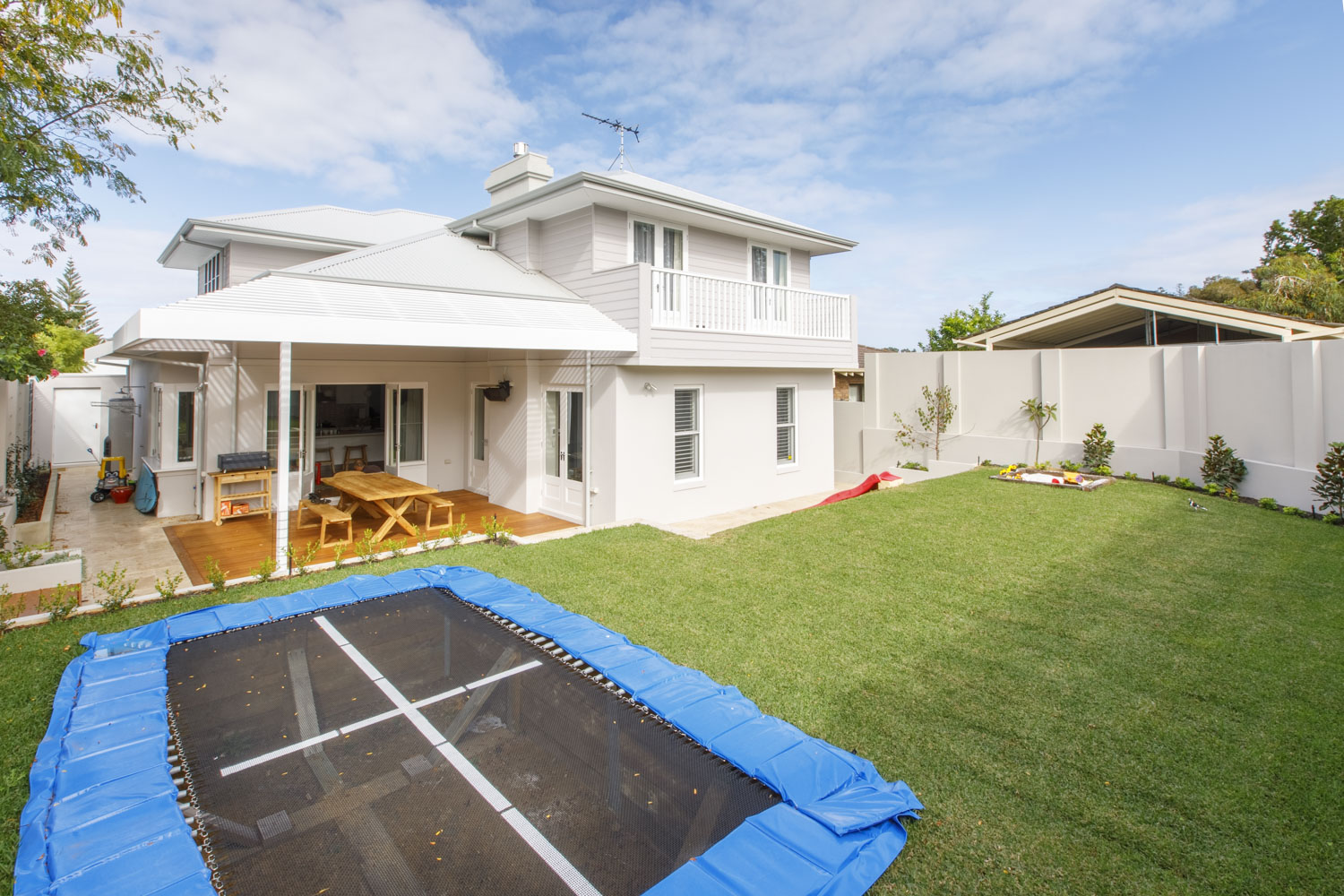 This is the stuff Bob-the-Builder leaves out of the TV shows!

But before I shatter the illusion of Bob’s perfection in the eyes of the younger generation, the building process had a profound impact on their eldest, Charlie. I may be wrong but I’m pretty sure his first words were ‘digger’, swiftly followed by ‘hole!’.

Often during a build, designs get tweaked and finishes and colours get changed. One room in particular is proof that all the colour swatches and hours spent with Dulux, couldn’t have foreseen this gorgeous and very loveable change to ‘White Duck Quarter’ in the kid’s bedroom. 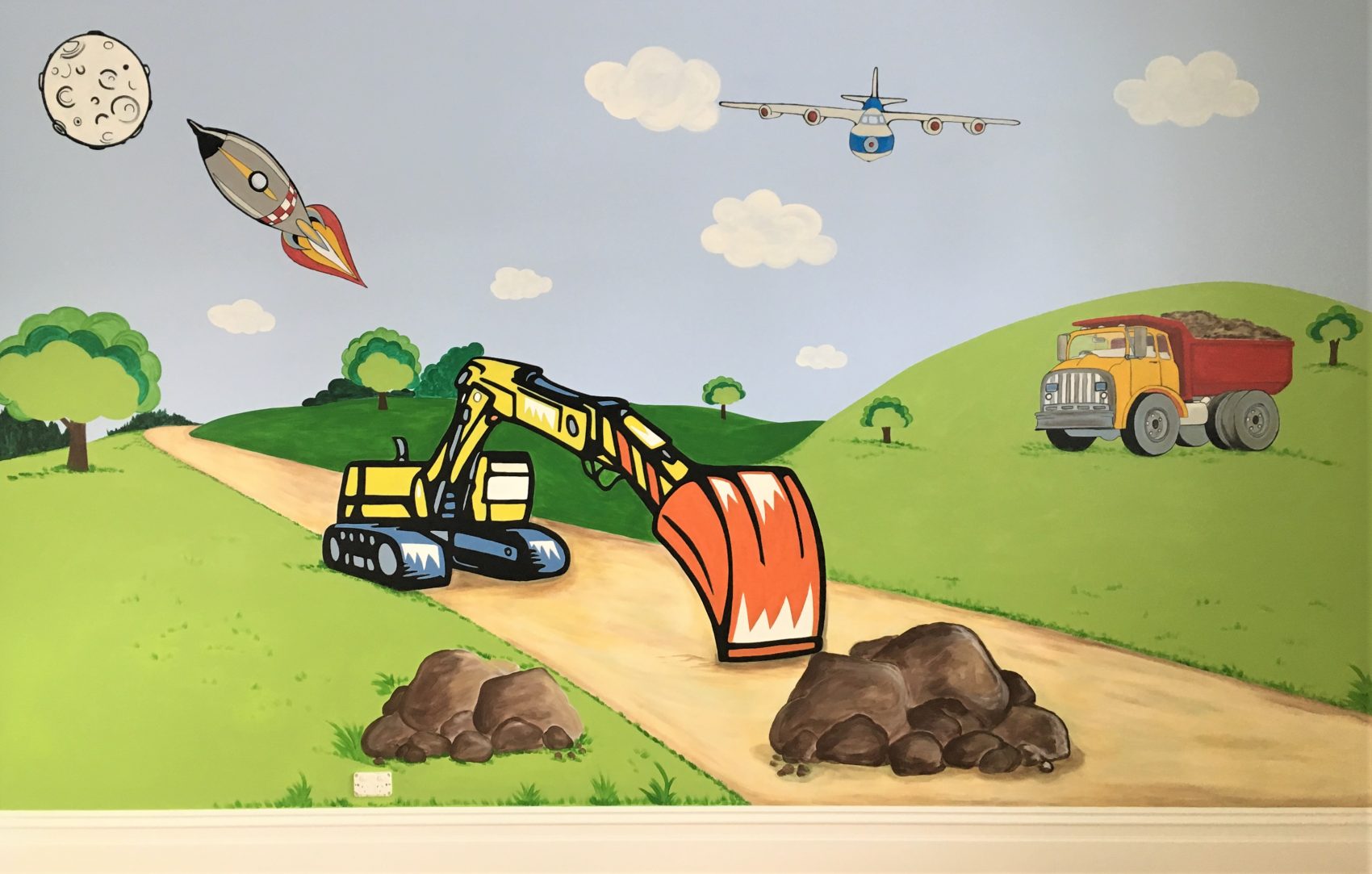 This project captures the absolute essence of renovating for me, where the true character and authenticity of an existing building is respected throughout the new addition.

The detail in the skirting, door frames, stairs, cedar windows and lofty ceilings are the modern-day equivalent of the old house. I reckon Gatsby would have liked it here! 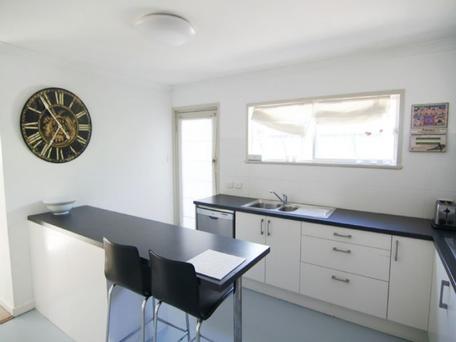 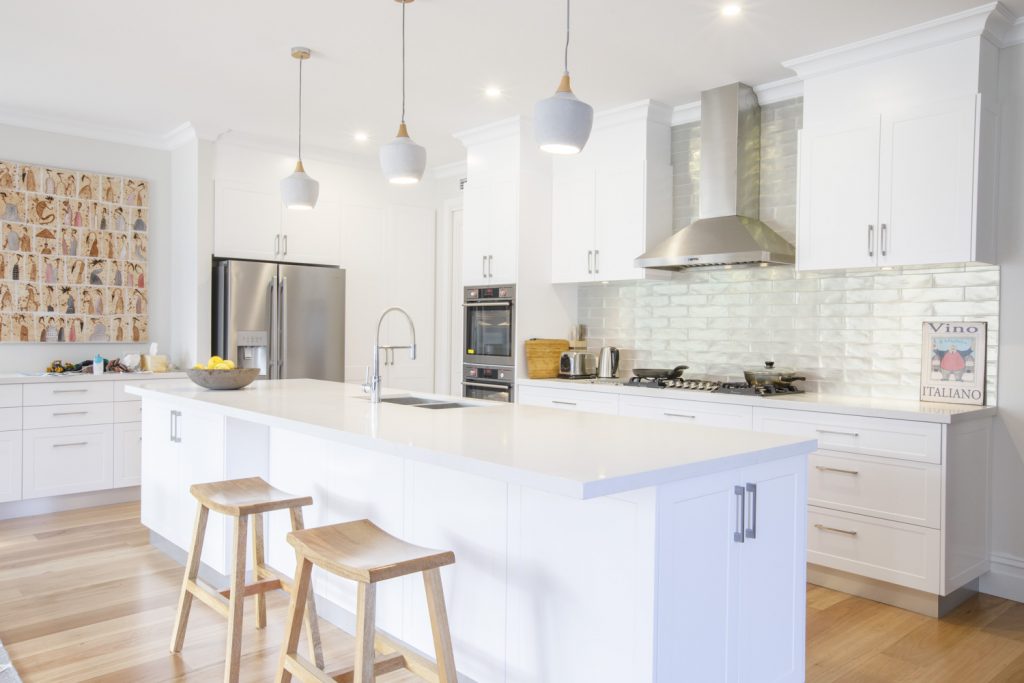 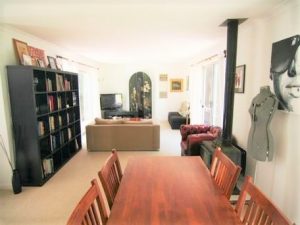 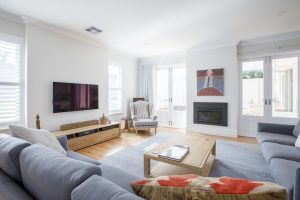 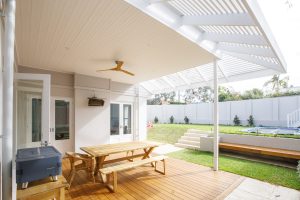 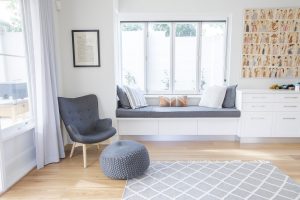 This is my favourite place in the house… coffee, magazine… I’m good for a couple of hours! 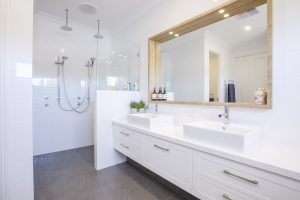 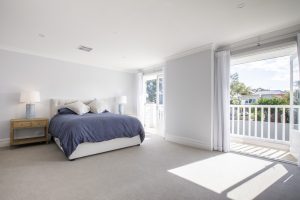 Don’t get me wrong, I’m rather partial to the odd character building marrying a contemporary extension and living happily ever after, but my soul is in the timber, the cladding and the overall simplicity of well thought-out designs. New spaces existing in a symbiotic relationship with the old.

It reminds me of being a child and having an old Golden Retriever, buying an enthusiastic puppy and watching them play together so well (I may have stretched the analogy but it worked for me!).

Rambling aside, the project was a finalist in this year’s Master Builder Associations Awards for Renovations and Additions $750k – $1m. You beauty!