I’ve read about ‘artistic license’ and from spending a number of my younger (even younger than now!) years embraced in the arms of an advertising agency, I became well accustomed to the phrase. Latterly, I realised it was a ‘creative’ way of justifying a headline or proposal, without the intent to offend or substantiate; the Mark Twain quote, ‘Never let the truth get in the way of a good story’, was basically a mantra. But I liked it, even if the Advertising Standards Authority preferred evidence-based proof and ‘8-point’ disclaimers.

So, my recent find comes with its own disclaimer: I may have used some creative license in the title but in no way was the preceding business, deemed to be trash – let the metaphor play out!

“Everything had its place and it had a reason for being there.”

Lily Bean opened last year, then suddenly closed earlier this year. Details are irrelevant, but it left an empty (albeit well appointed) space and a headache for the landlord (Kelly). Some would reach for the paracetamol, a leasing agent, and meditation App. But for Kelly, amongst other thoughts that I can’t reproduce on this site, she thought, why not reopen the café herself…and that my friends was exactly what she did. 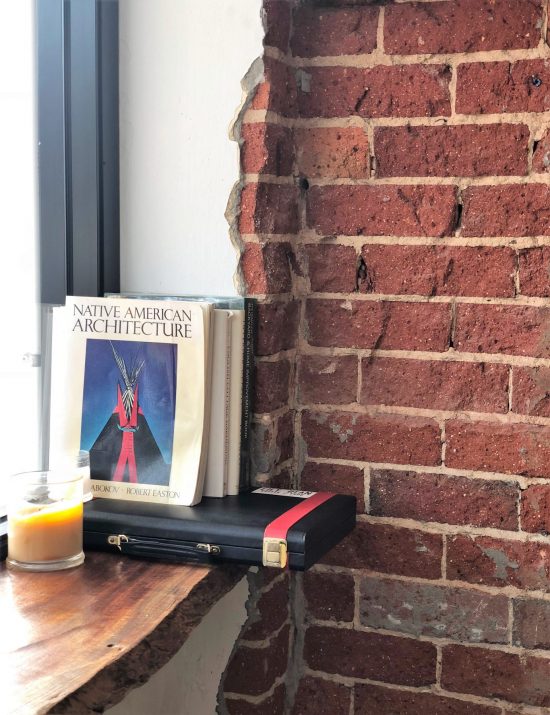 On paper, the design and finishes shouldn’t work.

One could portray the interior as slightly eclectic and quirky, almost thrown together. Yet, there’s more to it than that. The timber benchtops and exposed brick (yep, done well!), pressed tin counter front and antique mirrors live in a symbiotic relationship. I get the impression the backgammon set lodged against the window gets used and isn’t there simply for effect. In a pseudo-hypnotic state, I was drawn to flick through the pages of ‘Native American Architecture’…What the! Everything had its place and it had a reason for being there.

“They are like puppet-masters; the show just doesn’t work without them”.

Teapots and sugar bowls, which in another environment could be deemed kitsch, couldn’t have been chosen better. The contemporary exposed grey concrete floor is partly covered by antique rugs….RUGS! Who does that?! And, gets away with it! 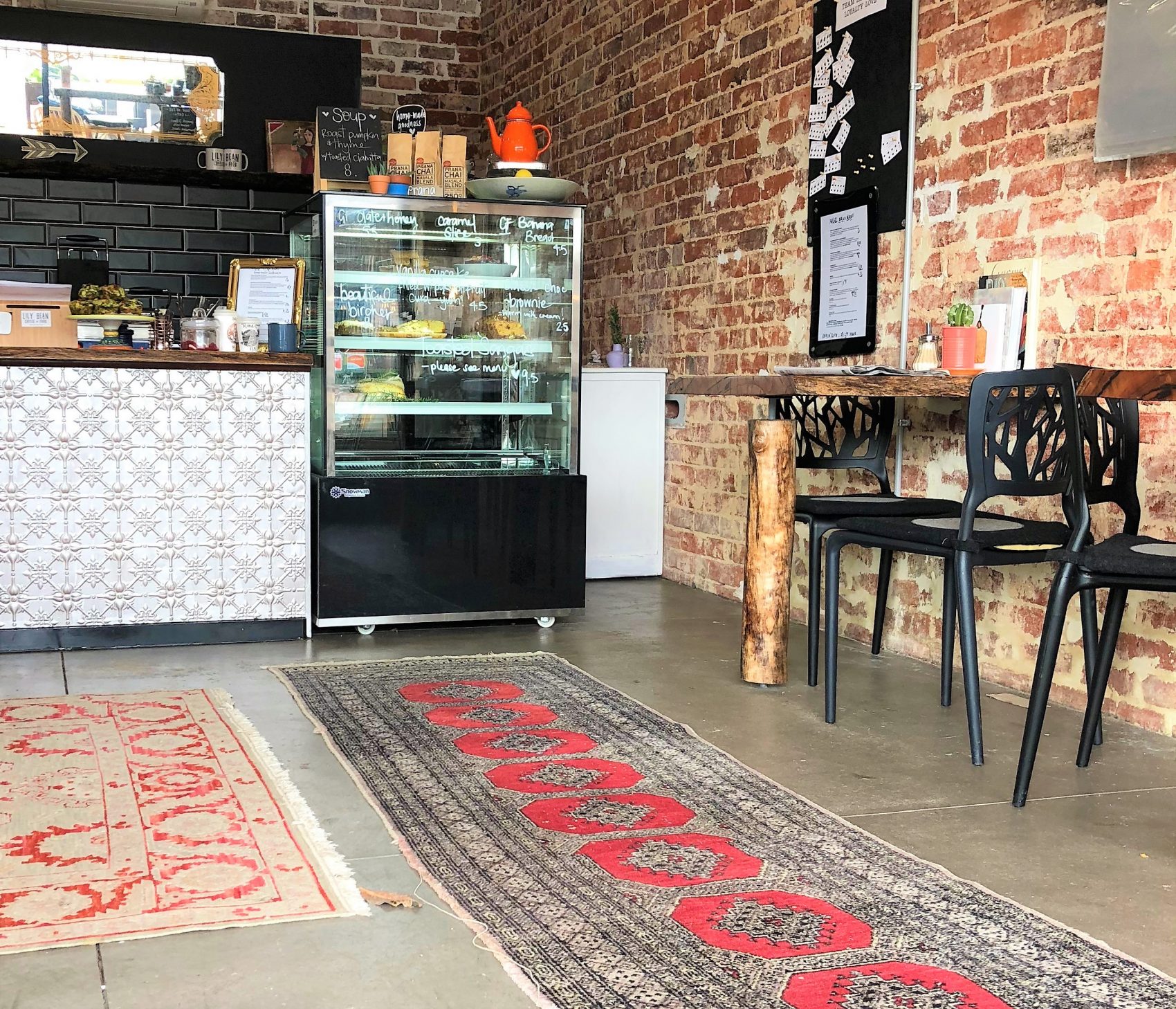 It feels like you’ve taken a step back in time yet the atmosphere is warm, inviting and far from ‘ye old’, with the average age of customer and staff combined, way below the age one would naturally expect from someone who owns a sofa my Nana would be proud of. 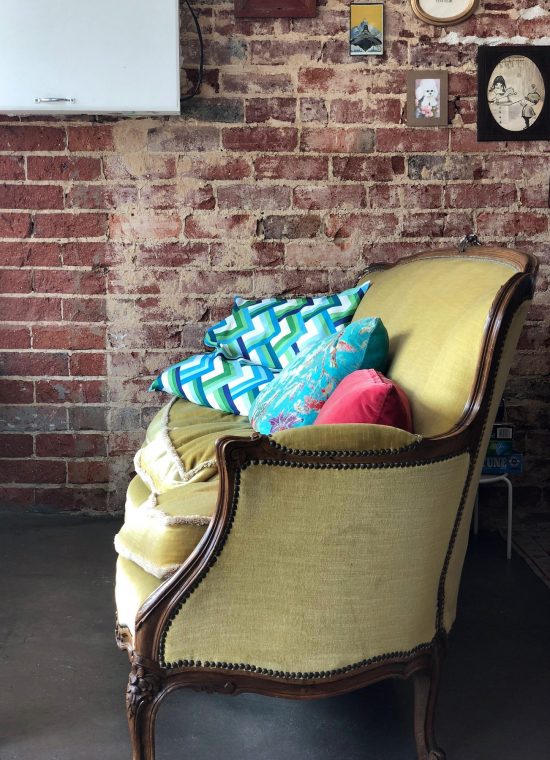 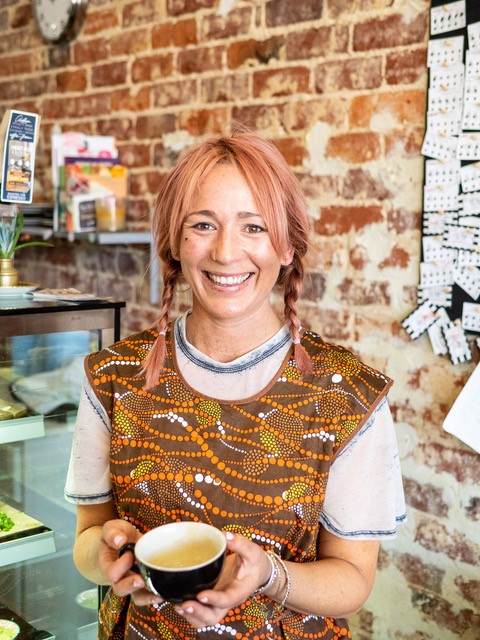 I see a reoccurring theme with the few coffee shops I’ve written about recently. While the design and ‘renovation’ of the building is what I’m fundamentally interested in, it’s the staff that makes it all come together. They are like puppet-masters; the show just doesn’t work without them. 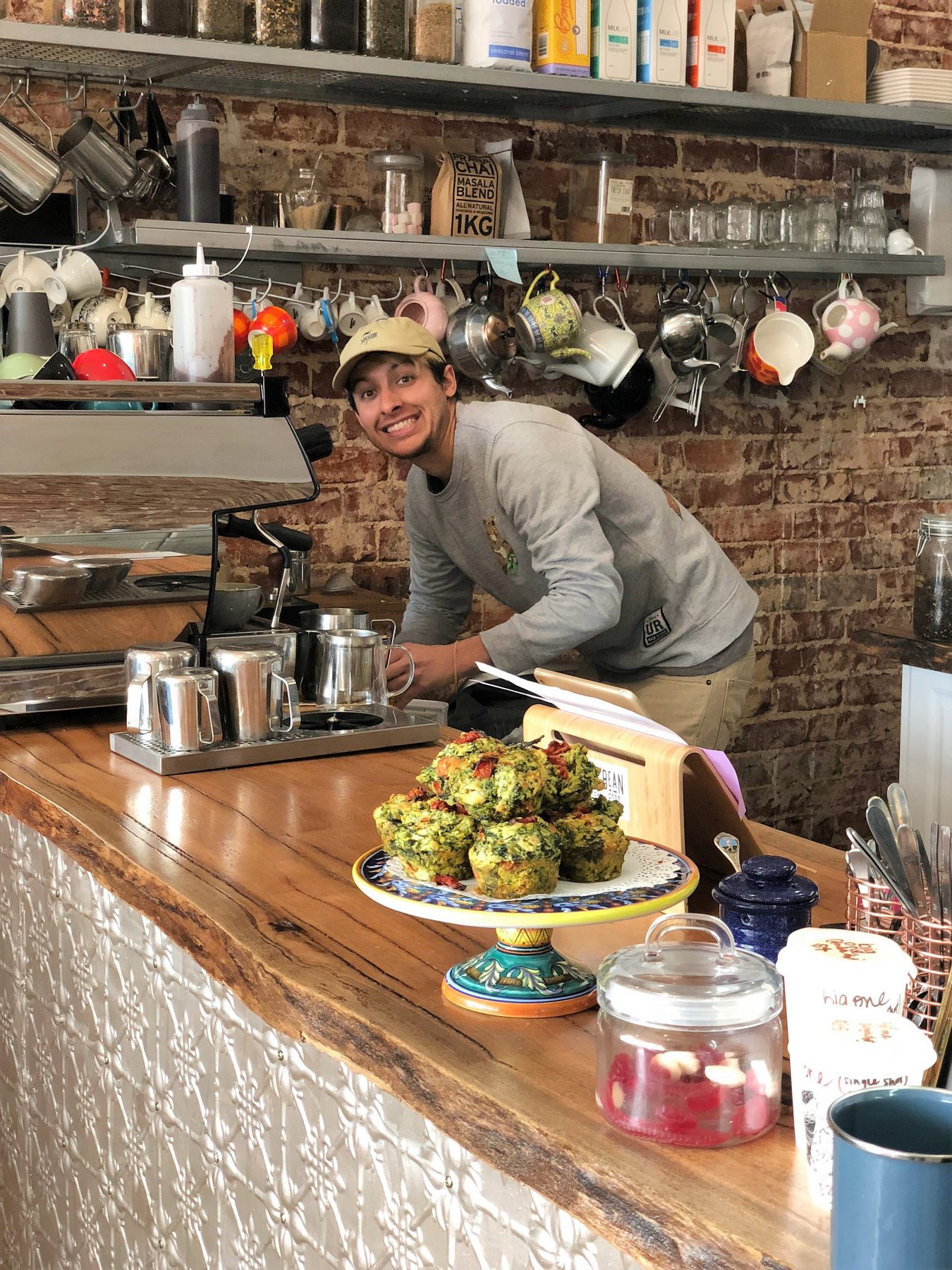 Customers names are brandished around in a cool American accent by a hair-free* barista. Brooks (really, cool name!) is cheerfully entertaining the customers alongside Zoe and Aimee, with smiles most cosmetic dental surgeries would pay to have on their advertising.

*I refer merely to facial hair. The cap could be concealing a further hair-free zone and as for the rest of him, that’s beyond my comprehension.

I recognise that my journalistic efforts are merely for personal enjoyment and I have more chance of being selected for the Cornish accolade of ‘Best Cream Tea 2018’ than winning a Pulitzer prize, but I find inspiration in certain places to write, work, read. Some just make you feel like hanging around for a while; some inadvertently encourage you to leave. Here I like to stay.

Even the selection of music feels like they’ve meticulously picked each song, with Spotify and Soundcloud nowhere in sight.

I hear laughter from customers and staff alike – it feels like a piece of ‘home’, even if the sofa, cane chairs (sprayed gold!) and rugs may not work together so well at home.

While I rarely make comment on the coffee or food selection (my culinary counterparts do that all too well), I couldn’t help but notice that the muffins are ‘made with love’.

A statement on the menu, which feels totally genuine – I think they might indeed love making them. In a children’s fantasy the muffins would have personalities of their own and run the coffee shop, everyone would love them and the ‘Santa Clause / Donna Hay combo-character’ would be the ever-cheerful baker making lives happier by the day. Crikey, even that’s pushing the limit of ‘artistic licence’ but you see my point.

The Coffee Saloons in the UK (see previous article – ‘A New Sheriff in Town’) would love this place, it’s how they see the world of coffee too. 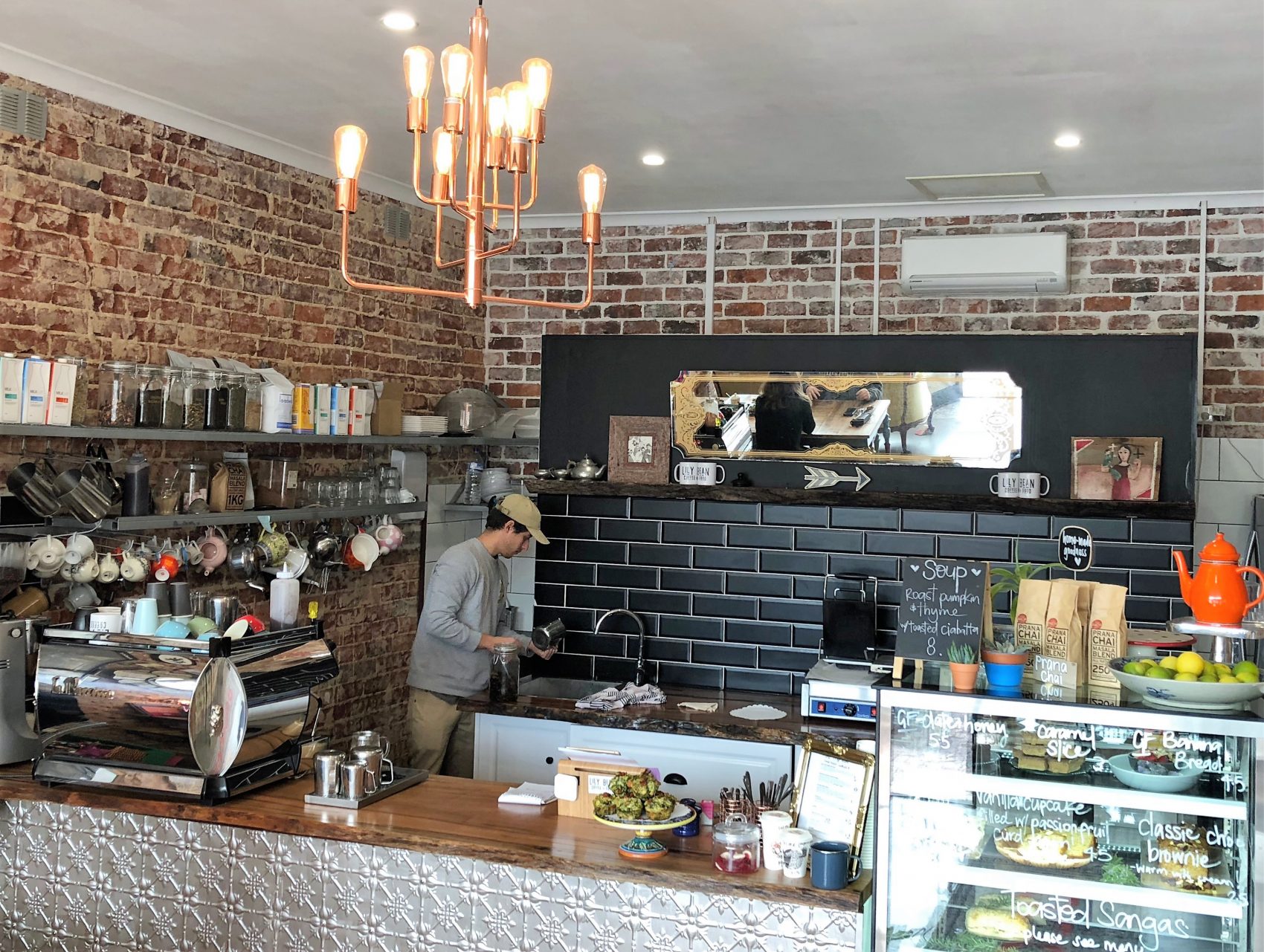 I’m far from anti-establishment and don’t go out of my way to find occasional designs or sites than shun the ‘norm’, but I do get a kick out of seeing something that most designers would struggle to comprehend in a non-critical manner.

There’s usually a single item that stands out…the first impression…the Jerry Maguire ‘You had me at Hello’…but at Lily Bean, I’d be hard-pressed to pinpoint one thing. Push me and I’m split between the brickwork and timber, but in isolation, they would be bland. Here it all melds together as a single impression. 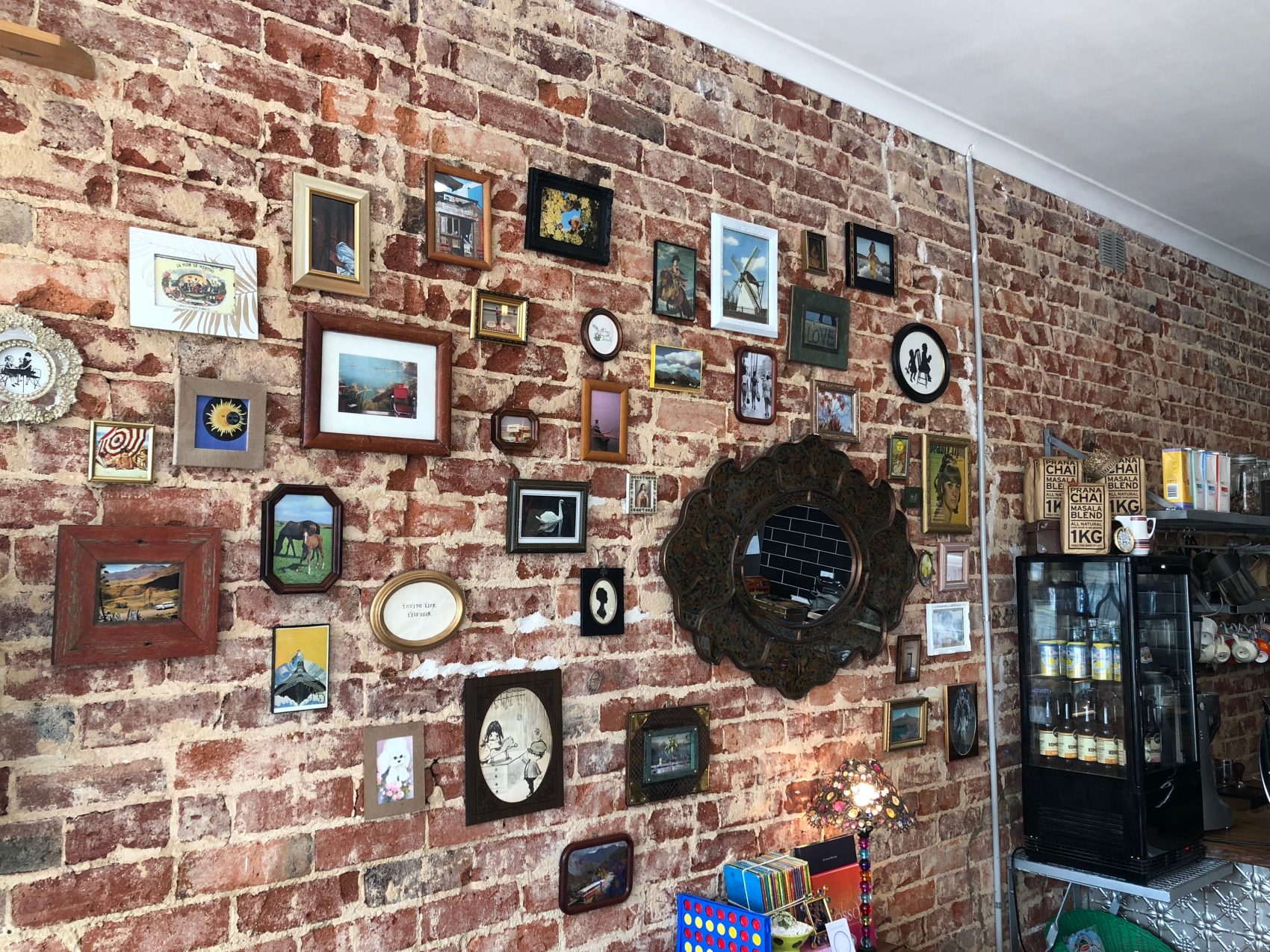 Hats off to the team, I’m looking forward to coming back for a game of Backgammon, Connect Four and getting lost in my Nana’s sofa for quite some time.

They say you should try to find enjoyment in the s

Never a truer word and from an amazing creator of

Here’s a teaser at completion of this awesome pr

Laptop in hospital with no sign of early recovery,

Yep..it’s coming! Here’s our teaser for some m

Can't get away from funky pipework in funky places